What If Santa Wanted A New Job?

The most popular man during winter holiday season, Santa Claus or Father Christmas came to every town a couple of days ago. It was a very important night for him because of his reputation as a professional courier who has to deliver more than 7 billion presents in one night. It’s highly stressful. Don’t forget it’s a night shift. He is not a student before the exam and not that young anymore, so it must be hard for him. So I thought, what if he wanted to change the job, how would he search for it?

Let’s start from the beginning

According to Wikipedia, Santa Claus is depicted as a portly, joyous, white-bearded man wearing a red coat with white fur collar and cuffs, white-fur-cuffed red trousers, a red hat with white fur, black leather belt, and boots. He carries around a bag full of gifts for children.

Santa makes lists of children throughout the world, categorizing them according to their behavior ('good' / 'bad', or 'naughty' / 'nice'). He also delivers presents, including toys, and candy to all of the well-behaved children in the world, and coal to all the misbehaved children, on the single night of Christmas Eve. He accomplishes this feat with the aid of his elves, who make the toys in his workshop at the North Pole, and his flying reindeer, who pull his sleigh. He is commonly portrayed as living at the North Pole and saying 'ho ho ho' often.

Santa has a fully mechanized production and distribution facility, equipped with the latest manufacturing technology where Santa and Mrs. Claus are executives and managers. He has to use many sleighs and fake Santa drivers to get the job done Christmas Eve, and the transportation management system (TMS) optimally builds thousands of consolidated sacks that maximize cube utilization and minimize total air miles.

Sounds too much for one person, doesn’t it?

Santa knows that to find a new job he has to create a resume, write down personal information, work experience, skills, achievements and additional info. He asks one of his elves to make it look nice, fun and up-to-date. After thousands of Youtube tutorials and Linkedin pages elfe created this masterpiece: 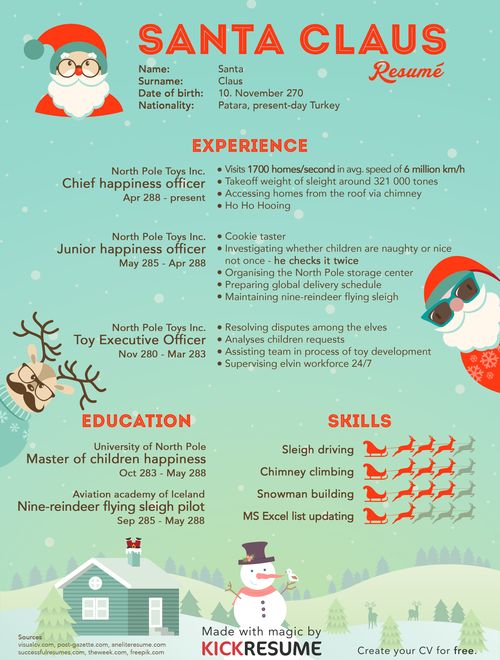 Let’s be honest, elfe has done a tremendous job; he even evaluated Santa’s professional skills. As we see, even Santa uses MS Excel. Good for him!

There is only one tiny problem besides the fact that he has never changed the place of work and his age (which makes me wonder about the philosopher's stone existence once again).

How can CEO’s check his abilities and real skills without meeting him because he is a busy man and has no time to plan trips for the countless job interviews which might not end well?

Wouldn’t it be nice if he didn’t have to fly across the planet and explain the same things in every job interview? If only he could show a piece of paper with all skills verified by hundreds of people that he could attach to the resume?

Thanks to the elves, Santa knows about the blockchain and its’ advantages since 2011. Therefore he knows that as a user of Aworker platform he can build a career regardless of the location. It’s a job marketplace where people can create a personal account to show the world professional and communication skills that explain their real abilities and achievements as an employee. Decentralization provides the best opportunities for building the new professional ecosystem. Each person can show how qualified he/she is and develop a reputation of a reliable employee with just a couple of mouse clicks.

As an advanced PC user, Santa will have no problems with creating an account and uploading the documents that verify his bachelor’s and master’s degree and other supportive materials. His elves can earn extra money too - by recommending him to the different job vacancies.

This man is known as a hard-worker, optimist and the kindest person in the whole world (even Ellen Degeneres is far behind). He has a successful company which works perfectly through the centuries. But if he wanted to find a new job as a CEO it’d be hard because only elves and his wife know what he is truly capable of. We’ve heard, we’ve read about him, but we’ve never met.

If you’d want a new job, what makes you different from the Santa in recruiter’s eyes?

How Professional Liability Insurance Can Save Your Business from Bankruptcy
2773

Working at Home Becomes the New Normal: Putting the 'Human' Into Virtual Meetings
4709

Executives Impart What It Takes to Lead
2794

Why AI is the Future of Corporate Training
3419

Gig Businesses and Silicon Valley Unicorns Compelled to Be Fair
3348

How to attract young talent to business process outsourcing
3329

Nourished leaders are 'key to success'
4104

How HR Can Implement A Data-Driven Culture