The new world of innovation

Since the discovery and emergence of computers, we have known that they lack thought capacities. That is something where human mind surpasses computing technologies. However, this may be changing. Computers might not possess cognitive abilities, but they are capable of executing operations which completely rely on human perception.

Whether it is business security, critical processes or customer experiences, it is possible to utilize the power of automation. From handwriting recognition, facial identification and behavioural pattern determination, to any task requiring cognitive skills, computers are capable of delivering the right solutions.

Let us get down to deriving a working definition of cognitive technology. The term ‘cognitive technology’ refers to the ability of a machine (precisely computers), to facilitate interactions with humans, by utilizing unstructured or structured data. The process also involves the application of self-learning or machine learning models for predicting outcomes beforehand. 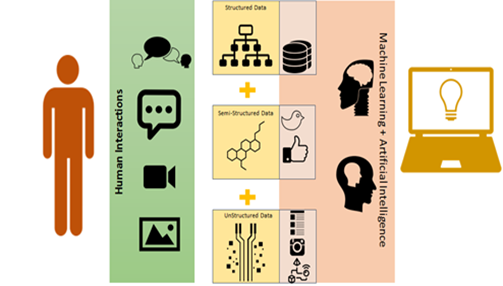 Breaking it further into three segments as the definition progresses:

Structured data is organized and restricted in context of what is going to be stored and how it is going to be stored. On the other hand, the unstructured data can be in any form and is unrestricted. It can be in any form - be it audios and videos. It is speculated that almost 80 to 90 percent of data in any said organization is usually unstructured and has an extremely high potential value.

So while the system has the structured and unstructured data which is subjected to the internet of things - you get a utopian world where all the things are connected and are interacting with each other. That is, we have three kind of relationships or interactions happening:

While the interaction between things and people will grow (we will see how in our subsequent blogs), we will also have things interacting to each other, which further adds to the concept of artificial intelligence and the third component of the definition.

Before delving into its depths, let us first describe what Artificial Intelligence (AI) is - a way for machines to develop intelligence. Although the definition of the term ‘intelligence’ is debated, it is recommended that we consider it as taking the best decision depending on the scenario. It was first introduced by Alan Turing, who used a method called the Turing Test to find out if a machine could be called intelligent. And since then, the field has seen tremendous growth and innovation.

One thing to note here is that what seems easy for a person, like vision, speech recognition, and other involuntary tasks, are actually difficult for machines to implement. On the other hand, difficult seeming tasks for humans like calculations, can be quite easy for machines. While things will interact with people and with other things, they would also be utilizing structured and unstructured data for learning and decision making which is in fact the whole concept of AI. Cognitive Technology is nothing but an outcome of Artificial Intelligence. Since cognitive technologies includes all such tasks that humans do everyday like vision, learning, planning, speech recognition and so on, so it is highly dependent on AI for its existence and implementation.

Imagine you have the habit of grabbing a cup of coffee right after you arrive home from work. Now what if your car tells your coffee machine to prepare a coffee right when you are about to walk through the door?

Cognitive technology: The why’s and how’s

Cognitive technology has successfully met the demands of each of these sectors. And it is here that we need to find out how. Business analysts and thought leaders classify cognitive technology applications into three broad categories, namely process, product, and insight.

Why is it important?

Technical innovations prepared the ground for rapid innovations in this sector. The emergence of natural language processing, ML or machine learning as well as speech recognition systems, takes computational operations to unsurpassed heights.

To be precise, cognitive technology empowers the IT infrastructure of an enterprise. As a result, business organizations are better equipped to make cost cut-downs by ensuring increased productivity and enhanced operational speed.

According to the prevailing market trends, the power of cognitive and artificial intelligence will take-off in the next 5 years, but only if users know how to incorporate it. In-depth knowledge and acquired expertise will create a win-win situation whereas half-hearted efforts and incomplete knowledge will bring about doomsday.

Take a look at the following points for a brief outline of the significance, use and implementation of cognitive technologies by some organizations:

A unique example of cognitive technology implementation into product offerings is Netflix. It is a movie rental service for movies and TV Series online. As any online platform, it suggests users more stuff to watch. Now, if the users’ interest can be predicted and the suggested content is in accordance with this interest, it hits the bull’s eye.

What is done: Machine learning is used to understand what kind of content a user would like based upon his/her past experiences. Accordingly, more content could be predicted and is suggested to users. This movie rental service on the virtual platform features a recommendation option that utilizes machine learning to predict customer preference

What is achieved: Since there is a sync between what a user is expecting and what is being suggested, the users end up watching the recommended or suggested content. The impact of this particular feature is undeniable, as it accounts for almost 75% of Netflix’s usage now.

Another brilliant example is of IBM Healthcare where they are using huge amount of data spread across large populations and are deducing conclusions and results which can be further utilized to improve the working efficiency and counter the issues faced by the organizations. They are working with various global medical institutes and hospitals and the results are impressive. One of them is a busy hospital which is delivering around 5000 babies, hosting 23,000 surgical operations, more than 588 open heart surgeries and around 70 kidney transplants per year.

What is done: At such a busy hospital, readmission of patients creates a crunch of resources and the patients who might be needing more attention are not attended or are attended late because of readmissions. The idea was to reduce the number of readmissions in the hospital for chronic disorders. Starting with COPD, IBM healthcare made a predictive model for the risk of readmissions so that interventions could be made at the right time

What is achieved: The prediction accuracy is 85% and readmissions are now reduced significantly. Owing to reduced readmissions, the limited resources of the hospital are best utilized for the patients who needed them most.

These examples are only a glimpse of what cognitive technology has in store for us and in successive blogs, we will explore the possibilities that the cognitive world promises!

A Beginner's Guide to Web Scraping With Proxies
4208

How robots are extending the scope of IoT applications
9423

How smart manufacturing and industry 4.0 are shaping the supply chain
32907

The implementation of blockchain in the energy sector
8033

How the IoT is redefining retail
11914

DATAx insights: How blockchain will transform the IoT
9079

Everyone is talking about the Internet of Things. But where is it?
5686

Creating the factory of the future with 3D printing
5411

Machine Learning: The Brains Behind AI